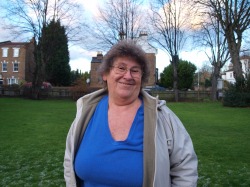 Jackie Addison has been a Councillor for Crofton Park Ward and a former ceremonial Mayor of Lewisham (1997-8). She lives in the ward with her family and has been a councillor locally since 1978. She believes in strong communities, with local people and businesses working together to improve their environment, and is an enthusiastic supporter of ward assemblies.

As Chair of the Lewisham Community/Police Consultative Group (LCPCG), Jackie works closely with Lewisham Police and the Council’s Crime Reduction Service to improve Community Safety in Lewisham and is Secretary of the Crofton Park Safer Neighbourhood Ward Panel, which is finding lasting solutions to local problems.

More about JACKIE ADDISON in her own words (written in 2010):
I am originally from North Yorkshire and came down to London to train as a teacher at a South London college. For many years I taught children in the neighbouring borough of Southwark. My husband has lived all his life in Forest Hill and we have lived in Crofton Park Ward since 1977. My oldest son and his wife also now live in the ward.

I am proud to have sent my two sons to local schools, first to Stillness, and then to the former Crofton School (Prendergast Ladywell Fields College). The education they received has allowed them to gain further academic qualifications, including an MEng, and now they both have highly skilled jobs.

I have been a Lewisham Councillor for 32 years and am the longest continuously serving councillor. I have always represented this area and have an excellent reputation for dealing with constituents' casework. Following correspondence from constituents I have set up a 'Crofton Park Bus and Train Users Group' and am now arranging the first meeting.

Over the years I have served on most Council committees and I have represented the Council on national and London-wide bodies. I also had the great privilege of being Mayor of Lewisham, which gave me the opportunity to meet all those people who work tirelessly to improve the quality of life for other people but never make the headlines or come into the limelight themselves.

I was recently elected as Chair of the Lewisham Community Police Consultative Group, which is a community engagement group funded by the Metropolitan Police Authority. At our meeting residents receive reports on current policing practices and can put their questions directly to the Lewisham Borough Commander.

I have been a member of the Crofton Park Safer Neighbourhood Ward Panel since its first meeting and for the past two years have been the Secretary of the Panel. Before the introduction of Ward Panels, I was heavily involved with the Brockley Police Sector Working Party, which covered the four wards that were policed out of Brockley Police Station.

The Panel is made up of concerned local residents and meets bi-monthly to receive reports from the Crofton Park Safer Neighbourhood Team (SNT) and  to set their policing priorities. Last year we set up a problem solving group to look at fly-tipping in the ward and some of the solutions we came up with have been adopted by the Council.

I also have helped to set up a Crofton Park Junior Ward Panel that is composed of the School Councils of the primary schools in the ward area. They meet once a term with the police and set one of the SNT policing priorities. Last year I ran a Crofton Park Primary Schools Poster Competition called 'My Street', the winners of which were taken on a visit to the police stables at Lewisham Police Station.
Published and Promoted by J. Maloney on behalf of Lewisham Deptford Labour Party at 2.01 Astra House, Arklow Road, London, SE14 6EB