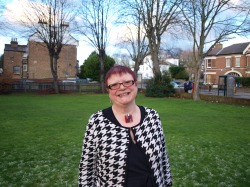 The mother of two adult children, Pauline has a long association with Crofton Park Ward, having run the General Napier Public House, on Bovill Road. She was Chair of Governors of Crofton School for 22 years and she is now a governor of Prendergast Hilly Fields College and Prendergast Ladywell Fields College; she is the governor responsible for Citizenship.

She brings a wealth of local government experience to Crofton Park: a former Grants Officer for the Greater London Council, then worked for Lewisham Council and ran the Mayor’s Office, Committee Services and Support Services to Councillors.

After taking early retirement, Pauline was elected as a councillor for Ladywell Ward. Pauline has always fought for equalities and anti-discrimination in all its forms. Whilst a councillor, she chaired the Social Inclusion Committee and as Mayoress she raised money to buy a mini bus for the Women's Refuge. Pauline currently chairs the Ladywell Safer Neighbourhood Panel. She is committed to community safety and engaging with young people, with a long successful career in supporting young people to realise their potential.

Before her election as Ward Councillor in May 2010, Pauline said: 'It would be an honour to serve Crofton Park and I will work hard utilising my time, experience and commitment for all people in the ward.'
Published and Promoted by J. Maloney on behalf of Lewisham Deptford Labour Party at 2.01 Astra House, Arklow Road, London, SE14 6EB